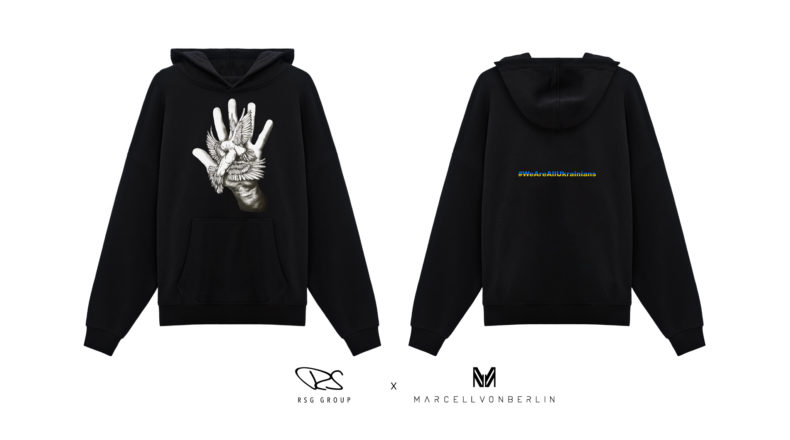 Berlin, March 18, 2022. Since the start of the Russian invasion of Ukraine, former heavyweight boxing champions Wladimir Klitschko and Vitali Klitschko, the Mayor of Kyiv, have been rallying global support for peace, freedom, and humanitarian aid.

Today, a sweatshirt emblazoned on the front with Wladimir’s hand releasing a pair of white doves and #WeAreAllUkrainians, the relief initiative started by Wladimir Klitschko and Klitschko Ventures CEO, Tatjana Kiel, in the colors of the Ukraine flag on the back goes on sale with 100 percent of the proceeds benefiting Klitschko Foundation* humanitarian relief efforts in Ukraine.

The charity initiative was conceived by the brothers’ closest friend Rainer Schaller, Founder, Owner and CEO of RSG Group, which owns fitness and lifestyle brands including Gold’s Gym and McFIT. Schaller has been friends with the Klitschko brothers for nearly 20 years, and the boxing champs served as brand ambassadors for McFIT from 2008 to 2018. Polish-born designer Marcell Pustul of MARCELL VON BERLIN, part of RSG Group’s brand portfolio, designed the sweatshirt.

“The Klitschko brothers are my best friends. It hurts me deeply to see the atrocities and destruction happening in their homeland because of this terrible war. They are personally committed—even at the risk of their lives—to the freedom of their country and to ensuring that Ukrainians get the help they need. Their leadership and bravery have inspired the world, and we want to show them and all Ukrainians that we stand with them.” — Rainer Schaller, Founder, Owner and CEO of RSG Group.

“As a native of Poland, I cannot believe the horror that is happening across the border from my home country.  We can‘t, however, fall into a state of shock. We must help the people in Ukraine however we can. This war shakes the cornerstones of our democracy and freedom. That’s why the message, ‘We are all Ukrainians,’ is so powerful. We must stand up for peace in the face of death. The white doves in Klitschko’s hand symbolize this.” — Marcell Pustul, Designer of MARCELL VON BERLIN.

“I created the hashtag #WeAreAllUkrainians with Wladimir to quickly bundle synergies and pool the aid efforts of partners. In addition to the transport of goods, which is being carried out on a large scale, financial aid is urgently needed. This high-profile charity initiative by our long-time ally Rainer and his partner Marcell will provide great support for us with their strong brand power.” — Klitschko Ventures CEO, Tatjana Kiel.

The #WeAreAllUkrainians sweatshirt retails for $100 USD and is available for purchase online at www.marcellvonberlin.com. 100 percent of all proceeds from the charity activity will go to the Klitschko Foundation* in Ukraine, which Schaller has known and supported for years. Due to the extremely tense situation on the ground, the Foundation’s aid is acutely focused on organizing urgently needed food and medicine, clothing and hygiene items for children and adults in the war zone. The Klitschko Foundation has been successfully working for children and their needs in Ukraine for more than 17 years.

The charity initiative can also be supported via social media by sharing the hashtag #WeAreAllUkrainians. For more information about the Klitschko Foundation, visit www.klitschkofoundation.org.

MARCELL VON BERLIN was founded in 2012 by designer Marcell Pustul and launches a ready-to-wear collection for women and men every season, alongside custom-made couture pieces. Both lines combine high-quality materials and impeccable craftsmanship. The progressive and unconventional designs are popular with celebrities such as Lady Gaga, Madonna, Jennifer Lopez, Kris Jenner, and Maluma. MARCELL VON BERLIN has two flagship stores, in Berlin and Los Angeles, and is growing steadily, with wholesale partners in major fashion cities worldwide.

With 6.4 million members across gyms, sports nutrition and digital services, RSG Group is the global leader in fitness. Founded in 1997 by Rainer Schaller, the RSG Group has become a globally operating business with 41,000 employees, including franchisees, at around 1,000 locations in 48 countries. With a renewed emphasis on health and a determined focus on sustainability, RSG Group’s extensive and future-oriented portfolio comprises of nearly 20 innovative brands, including fitness powerhouses such as Gold’s Gym, McFIT, the JOHN REED family of clubs, as well as creative and lifestyle brands such as MARCELL VON BERLIN, RON MILLER and PEARL MODEL MANAGEMENT. RSG Group consistently sets new benchmarks and provides momentum well beyond the fitness sector by continuously opening new fields of activity to remain an important part of its customers’ everyday lives.

For more information on RSG Group and its family of brands, visit www.rsggroup.com

*in cooperation with the DFB Foundation Egidius Braun

Rainer Schaller – Founder, Owner and CEO of the RSG Group