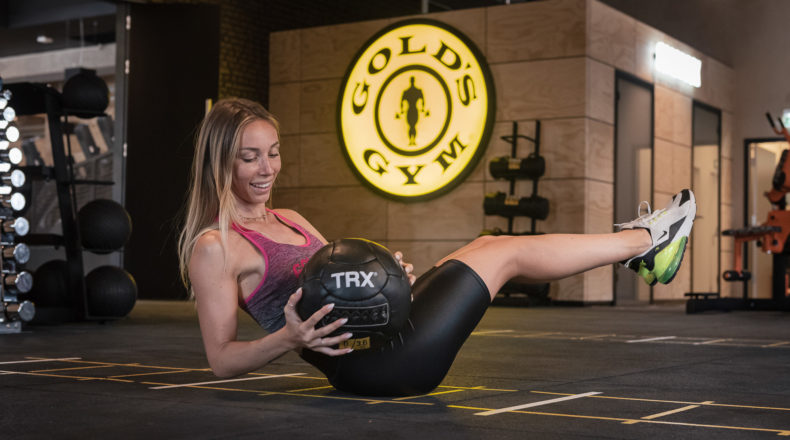 Milan, 07/30/2021. The wait is finally over in Italy: today the first Italian fitness studio by Gold’s Gym officially opened its doors in Milan. The iconic gym brand from California was established in 1965 by Joe Gold in Los Angeles and is the most well-known fitness brand in the world today. In addition to Berlin and Herne (in the north-west of Germany), the new studio in Milan is already the third company-managed Gold’s Gym by the RSG Group in Europe to have opened within the past three months.

Sustainable fitness concept
The new Gold’s Gym in Milan’s Palmanova district has also been awarded LEED certification for its ecological and sustainable construction. Eco-friendly aspects include the materials used for the build, remote controlled, automated lighting that makes optimum use of the natural light, water consumption monitoring and the installation of photovoltaic panels that help cover the studio’s energy needs. The sustainable focus is emphasized by the array of plants and greenery both inside and outside the studio.

State-of-the-art workout environment
Many elements from the world-renowned Gold’s Gym mecca in Venice have been integrated into the new studio. The outdoor area in particular brings the Californian vibe to Milan and enables members to train in the open air.

Other features of the 2,400 m² gym include the limited, 150 kg golden dumbbells, exclusive equipment by the brand gym80, an area for integrated functional training and a posing room for bodybuilders and stage competitors. Members can also look forward to a varied course program with various group workouts and LIVE videos taking place in the 180 m² course room. The offer is rounded off by a wellness area, a bar and a shop selling Gold’s Gym merchandise and Gold’s Gym Nutrition.

“This new opening in Milan means that fitness enthusiasts in Italy now finally also have the opportunity to work out in one of the world’s most legendary fitness studios,” says Vito Scavo, COO of the RSG Group. “We are especially proud of the sustainability aspect and versatility of our new studio. The most famous personalities in the bodybuilding scene have trained at Gold’s Gym. Here members will be able to find the right training for their individual goals and experience the legacy of the iconic brand for themselves,” adds Scavo.

From September 1-7, there will be an open week during which it will be possible to train at Gold’s Gym for free without having to take out membership.

About Gold’s Gym:
From Venice Beach to a global player: what started out as a small fitness studio in California/USA in 1965 has since become the most well-known and traditional fitness company in the world. Gold’s Gym. In the last 55 years, Gold’s Gym has developed into a global brand with just under 700 studios that has expanded to six continents with three million members. In July 2020, the RSG Group acquired Gold’s Gym in a court-approved auction process and integrated the brand into its portfolio, thereby making it the global leader in the fitness sector. And in 2021 the brand expanded in Europe, opening new company-owned studios in Berlin, Herne and Milan.